Access the latest information and resources on protest.
Go to LEGAL RESOURCES & REPORTS

Learn about the use of digital technology within the context of traditional ‘physical’ protests and virtual acts of protest in the digital space itself.

Learn about basic strategies activists can adopt to secure their communications and information sharing arrangements.

GIVE NOTICE OF GATHERING / PROTEST

A Quick Guide to Peaceful Protest

How to comply with the Regulations of Gatherings Act (RGA).
"Everyone has the right, peacefully and unarmed, to assemble".

Protest in South Africa is regulated by section 17 of the Constitution and the RGA, which provides that all protests must be peaceful and unarmed.

In order to protest in compliance with the RGA, a Convener (the person chosen to lead the protest) must give a notice of gathering / protest to the Responsible Officer (the person who facilitates the protest) at their local municipality or police station, at least 7 days before the planned protest, but only if more than 15 people are protesting.

In exceptional circumstances, notice can be given at least 48 hours before the planned protest.

After notice has been given, the Convener may be called to a meeting with the Responsible Officer and the police to discuss the logistics of the protest. After the meeting, or if a meeting is not called, the protest can proceed in accordance with the information contained in the notice.

Peaceful and unarmed protest is your constitutional right and it can only be restricted in limited instances.

Learn about the health consequences of crowd-control weapons (CCWs) from a recently released INCLO report.

Kinetic impact projectiles (KIPs), often called rubber or plastic bullets, are regularly used in crowd-control settings around the world. These weapons were developed in an effort to allow security and law enforcement personnel to keep their physical distance.

Chemical irritants, conventionally referred to as “tear gas”, are a group of CCWs that include a variety of chemical compounds intended to produce sensory irritation.

Typically referred to as water cannons, various types of water hoses either connected to in-ground water supplies or mobile bladders (often on trucks) have been used since the early 1700s, initially for fighting fires and later also for dispersing crowds or limiting access to certain areas.

Disorientation or concussion devices, also known as flash-bangs or stun grenades, are weapons that function by creating a loud explosion and/or a very bright flash of light. 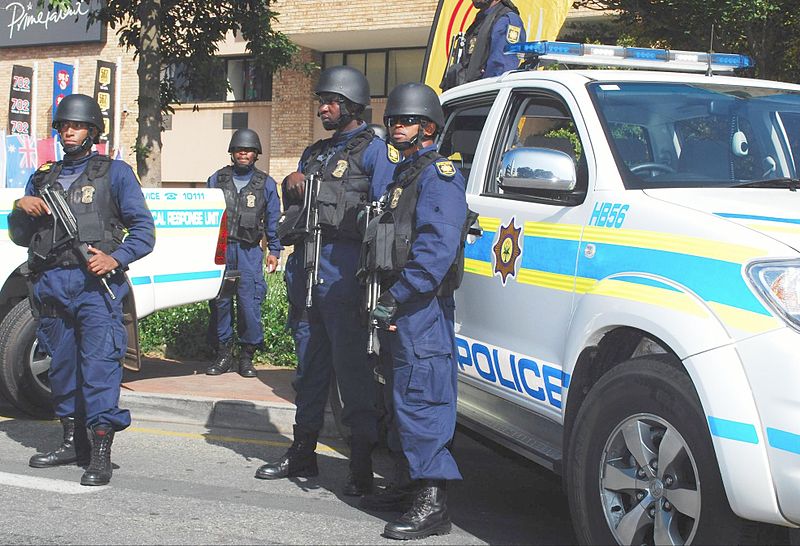 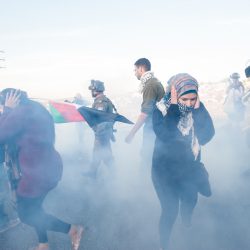 What is the role of private security officers during protests?

‘A security (officer) may not infringe any right of a person as provided for in the Bill of Rights and… may not … enter premises, conduct a search, seize property, arrest, detain, restrain, interrogate, delay, threaten, injure or cause the death of any person, demand information or documentation from any person, or infringe the privacy Read more about What is the role of private security officers during protests?[…] 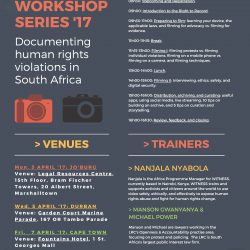 INVITATION: LRC / Witness Workshop Series in April 2017 on the ‘Right to Record’

During the first week of April 2017, the LRC and Witness are hosting a series of four interactive workshops on the “right to record” human rights violations in South Africa. The four workshops – which are open to the public and free of charge – will run from 09h00 to 16h30 on each day and will focus Read more about INVITATION: LRC / Witness Workshop Series in April 2017 on the ‘Right to Record’[…] 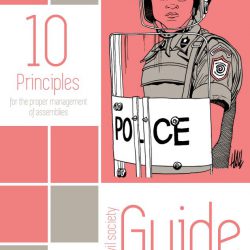 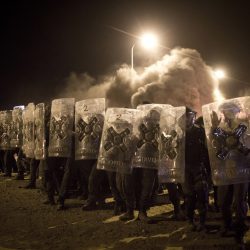 What are my rights if I’m arrested or detained? 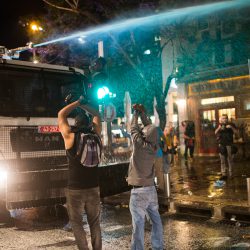 When can the police use force against protesters?

“During any policing operation, ongoing negotiations must take place between police officers and conveners or other leadership elements of a protest to resolve issues before they escalate (Instruction 13(2) of National Instruction 4 of 2014).” In terms of SAPS National Instruction 4 of 2014, “the use of force by the police must be avoided at all costs and Read more about When can the police use force against protesters?[…] 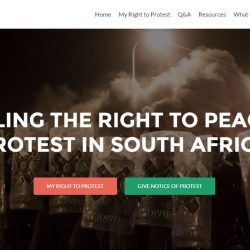 On Monday, 29 August 2016 during the State of Protest workshop at the Chalsty Centre, University of Witwatersrand, Johannesburg, the LRC launched Protest Info. Protest Info is web-based LRC Project dedicated to enabling peaceful protest in South Africa. Protest Info seeks to gather all the necessary resources to facilitate the right to peaceful protest and it provides Read more about LRC Launches Protest Info[…] 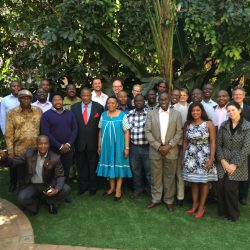 On Tuesday, 30 August 2016, representatives of the Legal Resources Centre attended the Southern African Regional Consultation on drafting the Principles and Operational Standards for the Policing of Assemblies by Law Enforcement Officials in Africa at Burgers Park Hotel, Pretoria. The development of the Guidelines for Policing Assemblies is a partnership between the African Commission on Human and Read more about LRC Attends the Southern African Regional Consultation Meeting on Policing of Assemblies in Africa[…]

We will try to contact you within 24 hours. If you need urgent advice, please contact us telephonically on 011 836 9831.